A journey to the land of the tiger

A journey to the land of the tiger

“How would you like to go to India, Tracy?” Harriet (my boss) asked me. I knew an origin trip was being planned to Elephant Hills, the estate that grows our Kahava coffee, but I had no idea I would be offered a ticket. I didn’t need to be asked twice. What an amazing opportunity.

I was to team up with Pierre Van de Poel from the Swan Valley KoffeeWorks and both of us would get to visit the Thalanar Estate in Valparai. Yahava has had a very close association with both the owners and the workers on this estate for many years and have funded building projects that helped house the pickers and workers.

The nine-hour flight from Perth to Cochin via Kuala Lumper, I was about to discover, was the easy part.

In Cochin we were met by Pathy Kasiviswanatha, nephew of Ravi (Ravichandran (Ravi) Angamuthu), the Thalanar Estate owner. Pathy lives and works in Sydney where he imports and distributes coffee, but he maintains very close contact with the estate and is a key advisor on quality and the technical aspects of growing.

After breakfast and a chance to freshen up in a hotel, we began the entertaining five-and-a-half-hour road trip. Leaving the city was an adventure in itself. The traffic was chaotic, horns tooting, as we ducked and dived through the mayhem until the landscape changed into farm land, crops and trees.  There was so much to take in, rubber plantations, betel nut palms, huge teak forests, cultivated rows of tea and gardens of peppercorns and exotic spices. The wildlife was also nothing like I was used to in Margaret River although there were plenty of cows. Monkeys scuttled over the roads and at one point we stopped to see an elephant and further on a rather menacing looking cobra snake.

The endless number of check-points meant we had a chance to stop and stretch our legs along the way. We rattled into the Thalanar Estate driveway late in the morning and were met by Sasa Sestic and his gorgeous eight year old son. After being shown to our rooms we dropped our bags and were directed to the processing plant where Sasa greeted us again with a big warm smile. He was busting to show us around and the pride he holds for their operation just bubbled out of him. 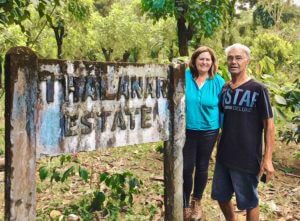 We were 1,500 metres above sea level and while the temperature was in the mid-twenties, it was still a little cooler than I had expected.

Thalanar was a 3,500 acre tree covered estate when it was purchased in 1959 from the Bombay Burma Trading Company by Angamuthu Muduliar, a very successful timber merchant. He teamed up with Matthew Titus a local who had first-hand coffee plantation experience and together they subdivided their land into seven separate estates. With the money they earned from tree felling they were able to build roads, fence their property, plant trees and even build accommodation.

Thalanar today is 500 acres of mature coffee trees with around 900 trees per acre, (the Indians still cling to imperial weights and measures; a throwback to colonial times). With much hard work the estate today produces around 3,000 kilograms of coffee from each acre. Titus continued his manager role for 30 years until in 1989 he was joined by Angamuthu’s son Ravi, then a strapping 17 year-old, keen to follow in his father’s footsteps.

Today the estate has 60 full-time workers who live on the estate with additional accommodation for another 100 seasonal workers. Thalanar is a virtual self sufficient village with a school, day care and even a Post Office. 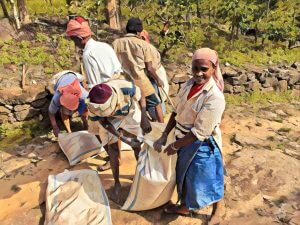 Every day busses transport workers to and from nearby villages.

Pathy and Sasa understand that the global coffee markets are becoming more and more demanding and particular about the quality of the coffee they grow, than was the case back in 1959. They both have experimented with different drying techniques to produce more sophisticated flavour characteristics. Originally all of the coffee was wet processed but today both natural and semi-washed beans are an important part of the Thalanar offer. 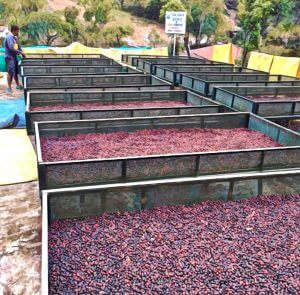 What makes this estate so unique in the coffee world is its position on the edge of one of the last bastions of the Royal Bengal tiger. Elephant Hills also known as the Anaimalai Ranges is currently under consideration as a World Heritage site. This wildlife reserve is a wonderful tourist attraction, but it creates a daily hazard for estate workers. Electric fences ring the entire estate in an effort to deter mainly elephants, but panthers, tigers and bison are equally a frightening concern. Needless to say when an elephant decides it wants to go through a fence an ‘electric tickle’ is not the most convincing deterrent.

After lunch we were to be centre stage in a special ceremony. Both Pierre and I were showered with gifts; traditional flower garlands were hung around our necks by some of the workers, as Sasa gave an animated speech. We were introduced as ‘the people from Yahava in Australia’ and told that everyone at Thalanar was working hard to produce better coffee. “We will raise the value of every cup, said Sasa, and that will mean a better life for us all.” It was a message that struck a chord with the workers and they flashed ‘beaming white smiles’ as they clapped enthusiastically. 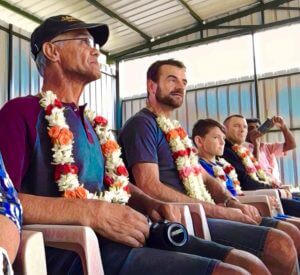 All of this attention was a complete surprise to Pierre and myself. I could see just how important we were in championing their work and their coffee in our KoffeeWorks, half a world away. To be so close to the people who grew our coffee and to see their genuine enthusiasm was a very emotional moment. I smiled and thanked them, but I could feel a lump in my throat as I fought back a tear.

At the close of proceedings Sasa waved the workers back to work and we were bundled into a four wheel drive for a tour around the entire estate. We stopped often to inspect coffee trees and to watch workers stripping cherries from the branches with incredible speed that was almost machine like.  In spite of the trees being pruned low to assist harvesting, this was physical work requiring endless trips up and down the sloping hills.

“Each tree is replaced after 40 or 50 years, explained Pathy, because at that point they have reached the end of their productive life. Then we have to wait another three or four years for them to fruit.”

The original plantings were of the Kent variety, but these are being replaced with the newer Sandramon and HRC stocks. 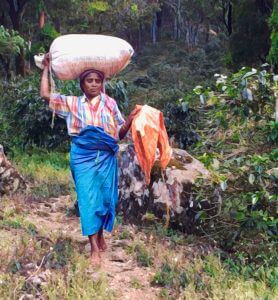 As the afternoon wore on, we could see workers coming off the hills with huge bags filled with the bright coloured cherries balanced perfectly on their heads. They were met on the track by a truck collecting the precious cargo destined for the estate’s processing plant. The driver set up a rudimentary wooden tripod from which he hung a well-worn scale. He carefully weighed each bag and meticulously wrote the details down in an equally worn text book. Each picker showed an intense interest in where the hand on the scale came to rest. These bags weigh on average 35 kilos, so I was astounded to learn from one spritely grey-haired man that he was 75 years young, but clearly as athletic as many men half his age. 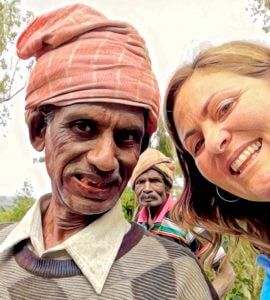 After weighing, the bags were emptied onto the back of the truck, the workers vanished back into the trees and the driver packed his gear back into the truck. A little puff of black diesel smoke spat out the side of the truck as he idled off along the track towards another group of pickers.

Towards the end of our drive we climbed past a startled bison, to the highest point on the estate where we watched the sun, a spectacular, orange glowing ball, sink behind the dark blue Anaimalai hills.

With the sky faded from red to black, we headed back to the homestead where a blazing bon fire and a couple of frosty bottles of Fosters would seal what was one incredible day. I was exhausted and Pierre looked the same even if he was saying nothing. That night I was asleep the moment my head hit the pillow and slept like a log.

In the morning we were treated to a hearty cooked breakfast of curry, rice, rice flour pancakes and sweet black ‘dripper’ coffee. The hospitality we were enjoying was just incredible.

Today we were to look over the processing facilities where we were handed a rake and got to stir and turn the Ona coffee beans (a coffee grown for their Deep Purple Project; designed to explore the potential of single origin beans). The beans are thinly spread on rows of raised beds where they dry through the heat of the day. Turning and mixing is a crucial part of the drying process and we were told this raking is done four or five times a day.

We also got to see the wet processing plant and watch more workers toiling over the harvest. What struck me was the huge amount of back breaking ‘man-power’ employed in this business. Mechanization is simple but it doesn’t seem to replace human effort.

For our last lunch we were treated to a traditional Kerala meal served on a banana leaf. Our trip back was along a different route to the one we had arrived. It was a tortuous two-hour descent down a hair-pin mountain track, finally leveling out onto an endless plain. We dropped in at another coffee processing plant at Pollachi. Here we watched parchment being loaded on lorries destined for the mill where the last layers of skin are removed before bagging for export. 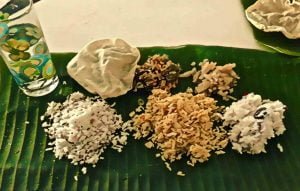 They must have known we had come down from Elephant Hills and would be slightly travel weary because we were handed coconuts that had been cracked open. The coconut water was cool and sweet and just what I needed for the four hour drive back to Cochin.

The trip back was just as fascinating as the first journey through the Indian countryside. I was just absorbed by everything I saw, there was nothing I wanted to miss. We had one last stop at the Ambrra River Resort. This was owned by Krishna Raj, (Pathy’s cousin) and was on the edge of a large cocoa tree plantation. This was another welcome leg stretch before we finally arrived back at our Cochin hotel.

That evening Pierre and I indulged in coffee and ice cream and talked about all that had happened and the things we had seen. This really had been a very family affair and the strength of family seemed to permeate the Thalanar ethos. Their heritage and history, the commitment they have to their worker families was ingrained in everything they do. 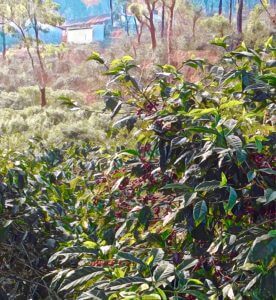 As the plane lifted off for the big flight back to Australia, I watched the city fall back into the heat and the haze. It was now only a memory, but one I will cherish forever.

Today each time I grind and brew Kahava beans, every time I sip a cup of Kahava, I see Sasa’s smile, I feel the heat of the bon fire, I see the old man dropping his sack of cherries at the weigh-in.
Just one sip is all it takes for me to be back in that incredible place and those wonderful people.