The exciting thing about our Specialty Estate program is that it gives us an opportunity to showcase coffees that many of our customers have never had the chance to try. We think this holds especially true this month, with most of our KoffeeWorks team admitting they had never tried coffee from Laos when this coffee from Theveda Estate hit our cupping table.

Coffee was first introduced to Laos by the French in the early 1900s. They experimented with coffee in a number of regions, before settling in the south of the country in areas like the Bolaven Plateau. Long-extinct volcanoes in the area have left soils rich in minerals, while higher altitudes and cooler climates also aid in coffee production.

During the war times – many of the French plantations were abandoned. Laos was bombed heavily by the US which, together with civil war and power struggles, stunted the development of the country. However, at the end of the Vietnam War, the local people slowly began to rebuild the agricultural industry. The country has typically produced Robusta coffee, with a recent push to place more emphasis on Arabica production – as the country tries to capture the specialty market. 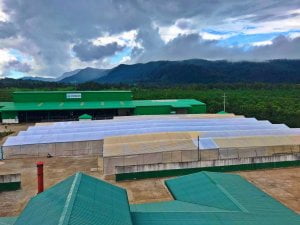 Fast forward to today, where Theveda Estate is located within this same Bolaven Plateau region. The coffee is grown in the shadows of Mount Fai Mai (Fire Mountain). The Plateau’s gentle slopes make coffee production easier, while the climate and soil conditions mentioned above produce an ideal growing climate for Arabica. When combined with quality picking and processing methods, the resultant coffee sits comfortably alongside specialty coffees from other countries who have been growing arabica for centuries.

Agriculture plays an important part in the Laos economy, accounting for about 25% of GDP and a majority of the labor force. With great potential for producing quality Arabicas, it will be interesting to see how the Laos specialty coffee movement grows over the next few years. In the meantime, although this might be your first look at coffee from Laos, we’re betting it won’t be the last.

Reading this in October? Grab a bag today!