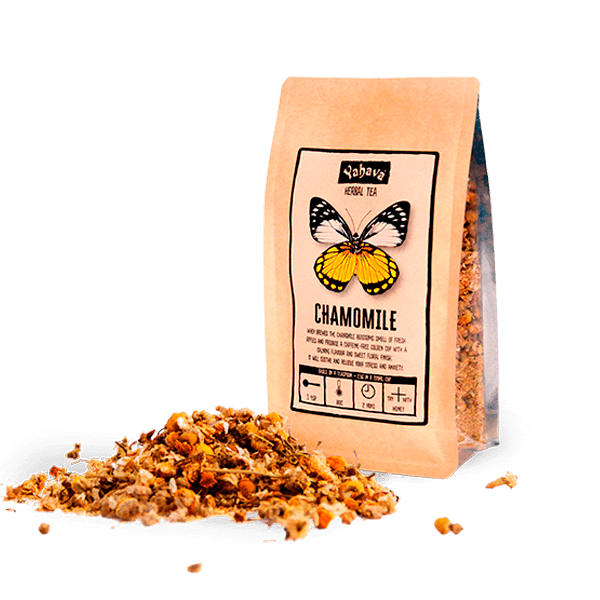 When brewed, the Chamomile blossoms smell of fresh apples and produce a caffeine-free golden cup with a calming flavour and sweet floral finish. It is soothing and can relieve stress and anxiety.

Chamomile Tea is one of our most popular teas and being caffeine free it is a great tonic to have before retiring to bed. Also, a flavonoid called Apigenin is found in chamomile that triggers brain receptors that can help you fall asleep. This caffeine-free tea can also help you unwind and relax. Since Chamomile Tea has notes of apple and honey, this drink is also a good alternative to desserts especially when you are craving sweets. 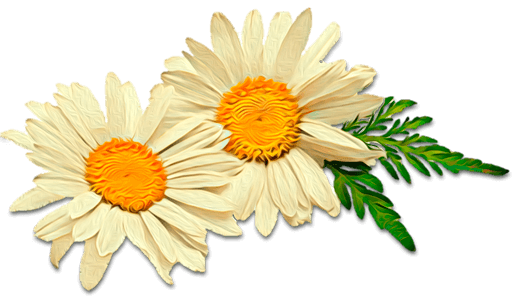 Health Benefits: Chamomile herbal tea contains antioxidants and naturally occurring compounds that
aids sleep, reduce insomnia and can also help with digestion. It also displays anti-inflammatory properties that are believed to reduce the incidence of some cancers
and have been shown to lower blood sugar levels.

Of all the herbs, Chamomile is possibly the most widespread, growing in most temperate countries around the globe. Chamomile has a delightful daisy-like flower that can be picked at least three times in a growing season. The buds have a floral, herby bouquet and when brewed the golden liquor releases notes of apple, flowers and herbs. The name has Greek origins and literally translates as ‘ground apple’ suggesting that the herb has been used throughout history. The calming and soothing properties of the tea are well known, but it also can prevent nausea and help with an upset stomach. At day’s end, a cup of Chamomile can help in reducing stress and will help you drift off to sleep.

Brewing Chamomile Tea
To get a clean and silky taste with notes of apple and honey, steep 1 teaspoon of Chamomile Tea in a 220 ml cup for about 2-3 minutes. 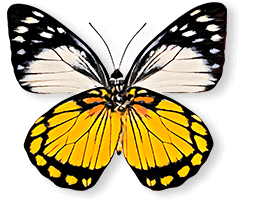 The Red Spotted Sawtooth is common in
Sri Lanka where Chamomile is grown. They are highly social and flock in huge ‘Kaleidoscopes’ often gathering around water. The edge of a Sawtooth’s wing has tiny serrations like teeth on a saw blade. These serrations reduce sound and improve aerodynamics.

What Are The Health Benefits Of Chamomile Tea?
Chamomile Tea has anti-inflammatory properties which help reduce swelling and help lessen the chances of acquiring serious heart diseases. The calming and soothing properties of this tea are well known, but it also can prevent nausea and help with an upset stomach. At day’s end, a cup of Chamomile will certainly help you drift off to sleep.
Are Your Teas Available As Loose Leaf Teas Or In Tea Bags?
Yahava’s premium Chamomile Tea comes as loose leaves. When you buy premium tea or tea in Australia from Yahava, you can select your Chamomile tea in 50 gram and 100 gram packs of loose leaf tea.
Are Yahava Leaf Teas Available To Purchase In-Store?
Yahava Premium Full Leaf Teas and Tea Bag Teas are available for purchase in select Yahava coffee shops in the region. We have Teas for sale in our Yahava KoffeeWork’s Swan Valley and Margaret River stores as well as in the Lifestyle Hub, Singapore. Buy Tea Online for Australia-wide shipping through Australia Post.